The chronic U.S. truck driver shortage threatens to disrupt supply lines and materially impact corporate financial performance.  But has the drumbeat of warnings reached the corner office?  There is evidence it has not, with companies ignoring the risk in the same way that many in New Orleans ignored flood warning signals before Katrina, until it was too late.

Americans are fascinated by weather forecasts. We have a 24/7 weather channel, and any hint of dire weather moves weathermen and women to the top of news broadcasts. 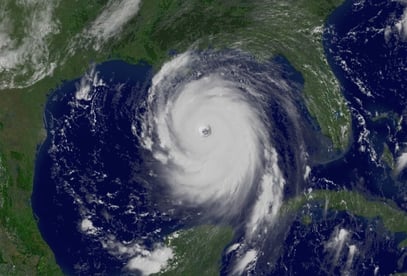 But a very small percentage of these storms deliver a worst-case scenario punch. As a result, people become immune to the hype and decide to take their chances instead of boarding up windows and heading out of town.

So it was with Hurricane Katrina. Weather experts recognized the “storm of the century” potential well in advance. But local reaction, while aggressive, came late.

Are we facing a similar scenario with the U.S. truck driver shortage?

Goodness knows, the drum has been beating loud and long within the logistics community. But are CEOs at manufacturers and retailers sufficiently informed about the potential negative impact on supply lines and operational costs?

One thing shipper CEOs have always been tuned into is the cost of freight – and for good reason.

Transportation leaders are used to the yearly CEO mandate to “reduce our transportation costs.”  Shippers regard trucking as a commodity service and play carriers against each other to drive down costs, often turning over responsibility for carrier selection and negotiation to purchasing professionals.

In a commodity freight market, the onus is on the carrier to position itself as the “carrier of choice.”  But we’re noticing some changes. Forward-thinking shippers, realizing that the U.S. truck driver shortage is making freight more of a seller’s market, are positioning themselves to be “shippers of choice.”

They recognize that, with a dwindling driver supply, carriers must focus available resources on the most efficient and profitable runs. So they clean up their own operations to avoid multi-hour wait times and other factors that make their freight less attractive.

Derek Leathers, President and COO of Werner Enterprises provided this candid assessment during a recent interview with TranzAct Technologies:

“We can’t price in 10 hours of inefficiency on both ends of a load because we will lose the driver regardless of what we pay him.  I mean they are professional truck drivers, not professional truck sitters….If we don’t feel a shipper has a committed plan of action, we and other carriers move those assets to shippers who have earned those assets due to their actions (to become more shipper friendly).”

That’s language that CEOs at shipper organizations need to hear because it’s language they understand. If they were to trade places with their CEO counterparts at trucking partners, they would likely take similar action in the face of the following market conditions:

This all adds up to what the ATA estimates is 25% less miles per truck – a sobering stat that signals a new reality in freight transport.

Companies Must Act Now to Mitigate Risk from the Driver Shortage

None of this suggests that shippers should dial back efforts to control freight costs, or that carriers are less obligated to try and deliver against this goal. It simply suggests that the U.S. driver shortage and other factors must trigger a new era of understanding between shippers and carriers.

A recent KANE blog explains some things shippers can do as freight capacity tightens. One of those things, particularly for shippers who have been playing the spot market game, is to begin developing carrier relationships to control transport costs.

Up until now, C-level executives at consumer goods companies and retailers have heard talk of a shrinking U.S. driver supply. But they’ve heard them as whispers of things that could, tangentially, impact the bottom line.

Going forward, that same talk needs to be heard through the amplified blare of a megaphone.

No one’s crying wolf here. Katrina is bearing down. Get ready.