Warehouse Change: How We Got Roger’s Buy-In 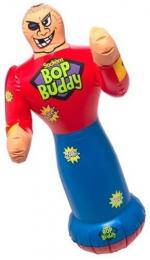 Several years ago while at a logistics industry conference, I attended a talk by an industrial engineer.  The subject: adapting to changing work practices in the warehouse.

With him at the podium was a friend he called "Roger."  It was one of those rubber blow-up props in the shape of a person, which has significant weight concentrated at its base to keep it anchored.  The speaker continually grabbed Roger by the shoulders and tried to push him in the direction he wanted him to go, but Roger kept bouncing right back to his original spot.  Eventually, the speaker picked Roger up and, together, they travelled quickly and easily to the new spot.

The moral of the story: warehouse change is hard enough and, when you try to force compliance on warehouse associates, it becomes even harder.  Better to jointly decide on the new direction and then travel there together.

Recently, we were faced with the challenge of redesigning our high-volume, cross dock facility to address the addition of a new feature we never had before – MORE SPACE.

We always thought of our cozy 24,000 square foot 3PL warehouse as a disadvantage, but in some ways it helped since we had less distance to travel and we had to be creative to navigate our tight quarters.  Lack of space has played a huge part in just about every design and process decision we have made in the last several years.   But, now we were going from 50 dock doors to 84, and from 24,000 square feet to 36,000.  We had some serious reengineering to do at our cross dock facility and some aggressive business targets to meet.

Instead of gathering the usual suspects in a conference room to discuss options and hash it out, we took our challenge to the associates.  We laid out our new throughput and productivity objectives and then asked for their ideas on how to get there.

Here are a few of the tools/approaches that we used to stimulate associate input:

Thanks to our associates' input, we discovered that bigger isn't always the solution to faster.  We ended up holding onto many of our creative "small footprint" ideas, but introduced a few "big idea" concepts to achieve the required results.  After months of planning, preparation and discussions, we implemented a dock layout change…which led to an unloading/slotting change…which led to a yard layout change.

And we're not done yet.

But these changes alone have resulted in a 6% productivity gain year over year, an accident free environment through 2013, and, most importantly, a sense of engagement from our associates.  Oh, by the way, our associates received their first Pay-For-Performance incentive payout in July, 2013, and we're hopeful it's the first of many to come.

Change is hard when you decide that you need to determine the new strategy and process flow, and then convince everyone to adopt the new plan.  Change becomes easier when you admit you don't have all the answers and start listening to the people who spend their days executing the very processes you're attempting to change.

The next time you're faced with a major warehouse change management project, take the challenge to your team and let the ideas flow.  And if you happen to run into Roger, just remember – he may seem a little stubborn at first, but once you get to know him, you'll be absolutely amazed at the clarity and creativity of his ideas.